Working with these guys in multiple territories the band was born in 2014 when Fabien Dargent (bass) and Eric Stevens (drums) - tired of the lack of artisitic liberty in a previous group - created their own electro rock project. Jacques Noach (guitar) quickly joined them and after a few years searching the right voice Lionel Vandendries became undoubtedly the ultimate singer for the band.

Tollan was chosen in reference to the Toltec capital in South America, Eric Stevens being himself a promoter of the "Four Agreements" also called "Les accords Toltèques" in French. Originally their aim was to mix modern electro sound with the approach of a conventional rock band, powerful rock tones contrast with soaring atmospheres. Their music can be dynamic and often dark and always powerful.

Their influences come mainly from the 80's, each band member has been deeply marked by New Wave coming out clearly in their music.

Their first record "Faux Départs" (False Starts) contains 11 tracks and was released early this year, recorded in the Belgian countryside studio to work on their first baby. 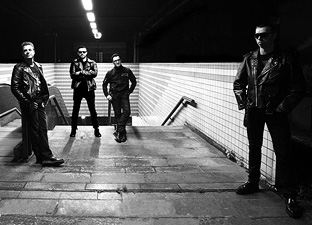