Formed in Barcelona in 2010, It's urban, it's funky and it's one hell of a show. Musically powerful a cocktail of sounds full of energy and some very serious beats and riffs...

In 2012 they recorded their first album "Dopamina" produced by Tomy Pérez in the studios of Marc Parrot, with which they began to expand nationally and internationally improving his show and increasing the media impact. After almost 100 concerts with the "Dopamina" tour they recorded their second album "Mojo" edited with Kasba Music in 2015. Well-known national funk artists such as Fundación Tony Manero and O'funkillo collaborated on it.

This latter tour took them to play in countries like Germany, Switzerland, Austria and France, bringing their own brand of "Street Funk" to new audiences.

In 2018 the band begins the tour "Welcome To The Paraiso" coinciding with the publication of their 3rd work where music finds its way via rhymes and stories A fresh and urban style. Energy and "groove" are the main ingredients of this machango cocktail. 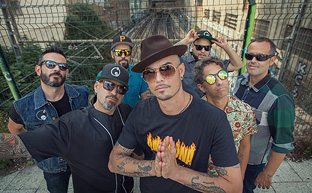