Turfu are ... errrrr, bloody awesome, Ian came across the band at Rudolstadt Festival 2022 where he saw, heard, a true explosion of sound and dance using a diatonique accordion and drums plus electronica. Just two irrepressible musicians and great sound engineer, an audience of all ages, dancing their hearts out in front of one of the main stages; just wow!

This duo presents a daring mix of dancing accordion rhythms alongside the abstract repetitions of electro. Long techno crescendos, dissonant squeezebox sounds, these young musicians move between dance hall and club, in a hypnotic trance, simultaneously gritty uplifting and oh so danceable.

Matthieu Souchet (LoG, XAMAN, Science Fiction), on drums and synth, jazz-trained and has a background in electro, but equally at ease with traditional French music, feeling at home its foot-tapping invitation to dance. Raphaël Decoster (Zlabya, Kate, and Raphaël) and his accordion have left their mark on the dance halls of Europe! However as the heady fumes of electro music intensified around him, they eventually became too hard to resist.

Souchet and Decoster's common aim is to get people dancing. Inspired by techno, repetitive riffs, French trad, and a generous pinch of mischief, together they are building a repertoire filled with love, partying, and a love of partying! 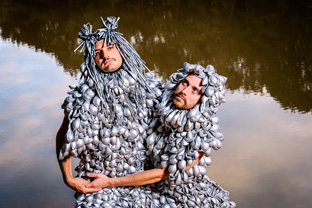