Having seen this really great young band from Russia at Wave music in Vienna we decided we had to offer representation, what are they ?

Independent music from Siberia: A mix of rock, funk and indie, meanwhile something distinctive musically. Singing in English, not always easy in Russia but born out of the creative cauldron within the musicians and from where they come from creatively and their home.

Other Noises released their last studio album "Shine Like A Star High" (S.L.A.S.H) in Moscow in 2014. Great reviews, and now the band have played most Russian festivals, music conferences and played concerts throughout the east. Now we're going to help bring them to the west and beyond. Other Noises were the official support artist of well known American rock-band 3 Doors Down, Moscow 2013, and played their set for more than 7000 of people in the huge Moscow stage Crocus City Hall to broad acclaim. 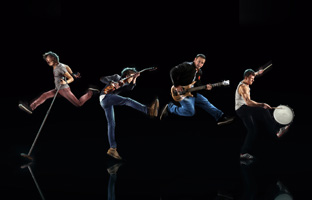