Formed, London, 2013! this unique band was born out of the desire to shatter stereotypes within this traditionally male-dominated genre. A 7- piece band with origins from Mexico, Cuba, Colombia, and the U.K they are the only female Mariachi band in Europe.

In July 2018, having played at the Women's Mariachi Festival in L.A, California they shared a stage with twice Grammy award-winning Mariachi Divas, received a standing ovation, and were interviewed and played live on Univision and Telemundo TV channels, and featured in countless publications.

They've played for venues include the Mexican & U.S Embassies in London, the British Museum, the Victoria & Albert museum, IKEA, Disney, the British Library, the Camden Roundhouse. Amongst their amazing breadth of performances, they've serenaded Salma Hayek at her private birthday celebration in London in September 2019 and have also played for Sophie Ellis Bextor, and opened for Arcade Fire. Each member is a superb instrumentalist, and no less than three lead vocalists, all with the vocal power and clarity expected from any serious mariachi band.

Mariachi classics are included in the repertoire, beautiful arrangements of well-known songs classics in English arranged in an authentic mariachi style, which makes the band unique and versatile.

All outfits and instruments are sourced from Mexico, bring it on for this fine Mariachi band .. gender means nothing, just superb musicianship! 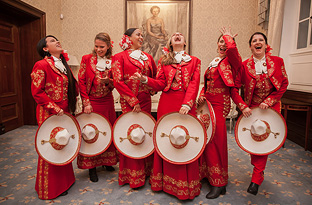