Delighted to represent this cool artist as a solo performer .. booking multiple territories.

A small bearded man enters the stage, tunes his guitar, takes a checking look through the room an starts his first song. The room goes quiet and is taken in awe. It sounds like a young Joe Cocker got the vocal range of Justin Timberlake and the guitar skills of Andy McKee. At the end, thundering applause and lots of fans more for Onk Lou.

But who is this Onk Lou? Originating from a small town called Ollersdorf in Lower Austria he was busking through Europe. He played at songwriter festivals in Denmark as well as in locations in Moscow, in flat parties in Berlin and on the streets of Italy, almost 100 gigs a year. Being overwhelmingly open he became humble by just playing for what the busking provided, a fact that got him to be humble. All of this enriched his song writing, being diversified, catching and at the same time high quality. Onk Lou was one of five Viennese songwriters who wanted to play a small concert on the Danube canal, made public/announced on Facebook. Over 7000 people came  coincidence?

In his new video "A 100 Voices" Onk Lou, accompanied by his band "The Better Life Inc.", yet again proves his qualities as a live performer. Even though the 25-year-old singer-songwriter just pinches the 1.60 meter mark, his voice and energy on stage resemble those of a towering grizzly, comparing him with a young Joe Cocker might not be too far off the track! Going straight into the TOP 30 of the Austrian airplay charts with his single "In the morning", "A 1000 voices" proves to be another sing-along-hymn and earworm.

In the last year he produced his debut album under the guiding of producer Florian Richling, travelled to Cuba to shoot his music video and has been tour mate of the Austrian band Granada. He crowded the band "The Better Life Inc." around him to give his songs more depth. And now he finished the album, a life packed in 16 songs, musically diverting between Frank Turner, Jason Mraz and Rag N Bone Man. A pinch Caribbean sounds, a Scandinavian influence and a lively breath of gypsy tunes, all carried by the voice of Onk Lou, forming the album called "Bogus".
Onk Lou about the album: "With 'Bogus' I wanted to commemorate those things that just pop up in our faces that we can't quite deal with, yet the good thing about them is that these things can empower us to do great stuff! It may be being lied to, being tricked or being let down. The nice facet of all these is that they force us to do better, to grow: They push us to get together to fight the good fight, to go out there and live life and show them what we've got!"
Laughing has always been the medication of choice for Onk Lou, he likes to joke around and does not take things as serious as they might seem. Always a funny story on hand, always a laugh ahead.

The same with his album: Humorous, full of energy and unpredictable. Like life itself. 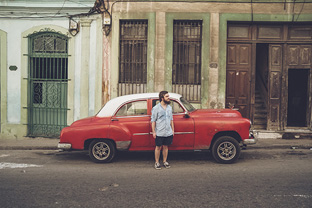