All I'm going to say is that this is one of the most powerful solo performers Ive ever seen or heard... to say he's a tour de force is nowhere near enough to describe the energy and musicianship of Antii. You think its "folk" think again its that and manyother things. Pure energy and quite beautiful playing, roaming from mellow and vibrant melodies to pure power .. with a beat and voice that you will never forget. Amazing doesn't come close!

Available for concerts/dances and yes, workshops!

Musician and composer Antti Paalanen has been prominent in the field of Finnish contemporary folk music for many years embracing a variety of genres.

Paalanen comes from South Ostrobothnia, a region rich in the pelimanni ('traditional musician') tradition of Finnish folk music. Between 1989 and 1996, Paalanen won the Finnish pelimanni championships on the diatonic accordion four times, and he placed second in the diatonic accordion world championships in Austria in 1999. He enrolled at the Department of Folk Music at the Sibelius Academy in 1997 and completed his M.Mus. degree in 2006. In 2015 he completed a D.Mus. degree at the Sibelius Academy of the University of the Arts Helsinki.

Paalanen has released four solo albums: ÄÄRELÄ (2007), BREATHBOX (2010), MELUTA (2014) and RUJO (2019). Meluta was nominated for the Nordic Council Music Prize 2016 and for the national Teosto Prize in 2015. Breathbox and Rujo albums has been nominated as the Etno Album of the Year 2011 and 2020 at the annual Emma Gala, similar to the Grammy's in Finland. Performing widely across Europe, Japan and Canada. is active as a musician and a composer in Finland. Appearing on 15 albums by various bands, contributing compositions and arrangements. He has written music for the stage and been employed as a stage musician at the Finnish National Theatre and other major Finnish theatres.

Meluta (We Wanna Make Some Noise)
In Paalanen's music, man and accordion breathe the same air and exude the same energy. He creates a one-man band, simultaneously producing bass, harmony, melody, vocals and percussion. The result is a massive, pulsating wall of sound where at times it is impossible to tell whether it is the musician or the instrument producing the sound.

Paalanen has a vision of integrating accordion into mainstream dance music, mining the capabilities of the instrument. On Meluta album, Paalanen's vision flies. The album forms part of his artistically oriented doctorate, representing the fruits of years of research. His vision is excellently demonstrated on the opening track, the title track of the album, 'Meluta' (We Wanna Make Some Noise). Combining melody with a techno beat and throat singing vocals resembling heavy metal.

The dialogue between musician and instrument gives birth to an alter ego, a volcanic man who screams at his accordion, kicks at the floor and snorts like a raging bull. This alternative personality appears in a number of guises on the album: an accordion rider (Acc Rider (The Final Waltz), an angry ruff (Ruff) or a happy bull (Angus), the latter a tribute to Paalanen's favourite band, AC/DC fronted by Angus Young. 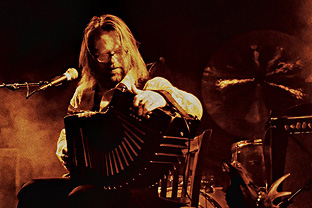