Frusion is DELIGHTED to welcome The Coup to the roster .. read on and ask if you want a MASSIVE show

The Coup hail from Oakland, California, their music a melting pot of cool influences, from Funk, Punk, Hip-Hop, and Soul, with the lyrics of leader and front man Boots Riley, there vibe is best described as political hip hop.
Want to know who they might be aligned with then try The Clash, Dead Prez and Rage Against the Machine. Politically radical and Marxist in their music their sound characterized by electronic sounds and bass-driven backbeats overlaid by funny, cynical and sometimes violent lyrics criticizing capitalism, American politics, pimping as a form of patriarchal exploitation, and police brutality, in fact to the core and roots of what's happening and what needs to be flagged up!

Boots also linked with Rage Against the Machine's Tom Morello to form Street Sweeper Social Club. The Coup remain vital and active; their album Sorry to Bother You, loaded with guests including Das Racist, Killer Mike, Vernon Reid, and Joe Henry, was released on Anti- (via Epitaph) in October 2012. And the future looks bright for this truly AWESOME band... We may be able to hook you up with a Street Sweeper Social Club gig , best to enquire ...

"Boots Riley of The Coup ranks as some kind of genius." - NY Daily News
"Holding all of this together, as always, is Riley's sharp humor. The Coup have always been a party band first and foremost, and Sorry to Bother You reaffirms their belief that the revolution, if there is going to be one, will start at the hips." - Pitchfork
"Riley's latest work with The Coup is more aggressive, danceable, melodic and weird than the hip-hop outfit's past releases." - Wired
"Like Sly and the Family Stone channelled through the Gorillaz... playful, funky, rocking and thought-provoking throughout." - Tucson Weekly

"The Coup now rules my world... possibly the best show I've seen this year... Riley is one magnetic frontman. If The Coup come back, don't miss the show." - Salt Lake Tribune

"(Boots Riley) is a consummately charismatic front man, establishing his as one of the best live rap acts going, after Philadelphia untouchables the Roots." - Montreal Gazette 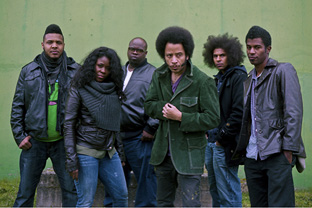