Banco has been performing and releasing now for many years and in 2019 he celebrates 30 years on the road making him one of the world's most respected digital audio artists. His legacy is as glittering as it is diverse, ranging from Hollywood film sound credits to the critically acclaimed Last Train to Lhasa, first released in 1995 to a rapturous reception.

Twenty years on, still one of the music industry's most maverick innovators, his 'timeless' sound continues to deliver. His live act persists in packing out venues and festivals all over the world, with live audio-visual performances renowned for their explosive, cutting edge quality: from sampling wizardry fused with haunting vocals and poignant acoustics, to genre-hopping musical instrumentals, all curated to socially-engaged audio visuals shining light on global issues.

Behind Banco De Gaia is artist Toby Marks. Starting out young in the industry as a drummer in a metal band, after falling in love with electronica in the 1980s acid house scene he started using sampling kit to cut his own tunes. By the early 1990s, after winning respect for a clutch of credits on early 90s Ambient Dub compilations - he released his first studio album Maya, on Planet Dog records in 1994, and Tibet-inspired concept album Last Train To Lhasa, in 1995, both shooting to No. 1 in the UK Independent Charts. His astonishing performance of Last Train To Lhasa on the Avalon Stage at Glastonbury '95, was released the following year as Live At Glastonbury ('a joyous triumph' - Melody Maker). This visceral sound, a cocktail of textured samples and live instrumentals lifted from across the world, is fused with compositional brilliance. It swept the international electronica scene, making him, along with the likes of The Orb, one of the early pioneers of 'chill out'.

Since 1994, Banco De Gaia has released 8 studio albums, 7 compilations, 1 live album, 1 DVD and 15 EPs, plus also runs his own record label Disco Gecko. With new album 9th of Nine Hearts due out this October, it's become clear that Toby Marks, legendary trail blazer of hybrid electronica, is here to stay. 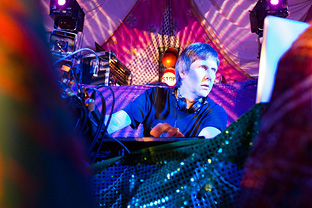