Delighted to represent this amazing talent with his ensemble presenting at this time iQba!

It's a musical project where the energy and sound of the Cuban Timba are mixed with contemporary Jazz. This production highlights part of the history of Cuba. Timba is a musical genre and a social movement that appeared in the nineties as a result of the crisis and some of the most difficult times on the island. Many musicians of his generation grew up listening to Timba's music, but only a handful of artists had the opportunity to collaborate and learn from a Timba band stand. For Carlos Averhoff Jr. music has no frontiers, the album "iQba" made by Cuban musicians living in Cuba and others living outside the island strengthens and contributes to the dissemination of Cuban jazz music internationally. iQba is a musical expression and reflection of Averhoff Jr. as a composer and band leader, creating unique contexts that show connections with the Cuban culture and contemporary Jazz. His performance and direction resounds in equal parts highlighting the intense Afro-Cuban rhythms and at the same time subtle jazz melodies, mixed with an accurate musical intellect, showing an artist who is ready to explore new sound territories.

Latin Grammy-nominated Cuban tenor saxophonist Carlos Averhoff Jr. is a  contemporary Afro-Cuban jazz composer and educator described by All About Jazz as "a dynamic, fresh new voice on the saxophone." Exposed to music early on through his father and namesake, a legendary saxophonist and member of Chucho Valdes's Irakere, Averhoff was classically trained in his native Cuba and after completing extensive academic studies at Berklee and beyond.

Averhoff has collaborated with an array of artists including Bob Moses, Horacio El Negro Hernandez, Chucho Valdes, Bill Pierce, Isaac Delgado, and Buena Vista Social Club, among many others. Says Averhoff of his alma mater: "Berklee is a universe of music connected to the world." 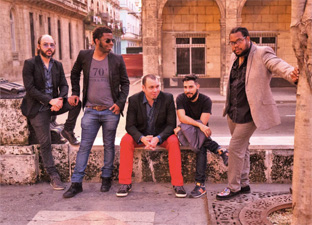